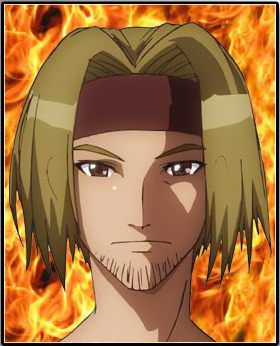 Uzu was just puffing invisible smoke and smiled wickedly. “How can you prove your strength against a bunch of nobodies. You even lost to the Pervert.”

Monarch turned half way around and looked down to his fist that held new walnuts. He clenched his fist enough to have the blood flow elsewhere and turn a pale white. Neither of the nuts cracked under his serious stare. “Uzu, I lost because they are not easy to be beaten.” His darkened eyes look back at Uzu who could clearly feel the anguish and fearful aura he was emitting. “Be warned or the joke be on you.”

His large figure walked away with his hand raised and waving. “See you back here after the fights.” Some of the people followed his disappearing figure like a dark cloud.

Nikaidou stood silently, contemplating what his next move would be. He wasn’t under control of ratchet anymore as they had disbanded but he fought around Monarch before. Fingers rubbed his chin in slow paced manner and slid around his neck. I am no longer a dog and can follow my own intuition. “Satou, I be following him tonight. I want to fight along side him this once as equals. E do go back some time…”

Satou, Sen nodded in agreement. “Go and lay your pride on the line and come back victorious.” Satou did not had to think twice and send him off with his words.

“Pervert is it okay if we take this one.” Monk and Goattee stood behind them, with a finger pointed at a nearby super. “We sure love a good fight with you all, but kind of like Monarch we do want to come our with a half priced bento.’

-“You were but a barkling not so long ago, but you showed us what it means to be called wolves. We like to thank you for that and show you we have grown since our fight with the ‘club of hercules.” Brunette stepped to the front of the two men while she sad those words of praise. She than crossed her arms and pushed up her two magnificent breasts.

Another wave formed from the gravities of the city and moved away towards a super. Still there were glints sparkling in the shadows. Each and every one of them seemed hungry and read to jump on any pray that would walk by.

“Wow I never expected that from them.” Satou sighed deep and rubbed the back of his head. Feeling a bit awkward with all that praise all of a sudden.

-“There you are!” The voice came from a dark part of the streets.

From the foot steps one cold tell she was getting closer. And though surprise was written across a couple fo faces there were two who recognized the voice straight away and froze on the spot with a cold feeling creeping up their spine.

“Ho… How did you get here?” Shaga pointed with a trembling finger towards the voice and saw a pair of women legs wrapped in white thigh high socks, step into the light.