To be fair I am not much home or behind the computer. I read my novels do some kind of excerzise beside my search for interaction and a less boring life.

The next song is just so much fun to listen to and has that same question being asked as well. It is also because it has been to long since I shared a song with you all.

It is from Leaf and called Superwoman. Sing along, dance and have fun out there. Life is just to boring to be behind a phone, tablet or computer. Go out and interact.

Sometimes I do have difficult thoughts.

Time to stop writing down these vocal cords!

Just a thought on a fun note this time around with nice twist I think. I am not saying we should stop writing in our artistic way, it is still a way to express ourselves though not always understood by others. I do think communication should come back and not through fast text through social media.

Uzu was just puffing invisible smoke and smiled wickedly. “How can you prove your strength against a bunch of nobodies. You even lost to the Pervert.”

Monarch turned half way around and looked down to his fist that held new walnuts. He clenched his fist enough to have the blood flow elsewhere and turn a pale white. Neither of the nuts cracked under his serious stare. “Uzu, I lost because they are not easy to be beaten.” His darkened eyes look back at Uzu who could clearly feel the anguish and fearful aura he was emitting. “Be warned or the joke be on you.”

His large figure walked away with his hand raised and waving. “See you back here after the fights.” Some of the people followed his disappearing figure like a dark cloud.

Nikaidou stood silently, contemplating what his next move would be. He wasn’t under control of ratchet anymore as they had disbanded but he fought around Monarch before. Fingers rubbed his chin in slow paced manner and slid around his neck. I am no longer a dog and can follow my own intuition. “Satou, I be following him tonight. I want to fight along side him this once as equals. E do go back some time…”

Satou, Sen nodded in agreement. “Go and lay your pride on the line and come back victorious.” Satou did not had to think twice and send him off with his words.

“Pervert is it okay if we take this one.” Monk and Goattee stood behind them, with a finger pointed at a nearby super. “We sure love a good fight with you all, but kind of like Monarch we do want to come our with a half priced bento.’

-“You were but a barkling not so long ago, but you showed us what it means to be called wolves. We like to thank you for that and show you we have grown since our fight with the ‘club of hercules.” Brunette stepped to the front of the two men while she sad those words of praise. She than crossed her arms and pushed up her two magnificent breasts.

Another wave formed from the gravities of the city and moved away towards a super. Still there were glints sparkling in the shadows. Each and every one of them seemed hungry and read to jump on any pray that would walk by.

“Wow I never expected that from them.” Satou sighed deep and rubbed the back of his head. Feeling a bit awkward with all that praise all of a sudden.

-“There you are!” The voice came from a dark part of the streets.

From the foot steps one cold tell she was getting closer. And though surprise was written across a couple fo faces there were two who recognized the voice straight away and froze on the spot with a cold feeling creeping up their spine.

“Ho… How did you get here?” Shaga pointed with a trembling finger towards the voice and saw a pair of women legs wrapped in white thigh high socks, step into the light.

What do you know. It is another first Friday of yet a new month. Just thinking about, we are about two months away of the half year mark. And here I am just rambling through my fingers that dance across the keyboard. Happy that is weekend or almost, depending on the part of the world you are living on.

This day is used to have some information on what is going on my blog, in my life and plans that still need to take form at some stage.

When we talk plans there are not many. I am pretty pleased with what I am doing on the ‘Ranting Crow‘. Also it is the shape I feel most comfortable with. Regretting I haven’t done a Sensual Sunday Story for a long time. It may have been due to various reasons I do not need spilling here. But that is changing, that I can promise you. The first one up will be a double and if my fingers keep up in the time span a triple length.

Rather than to dip into the hotness of just the story, I also regained some love back for the art of drawing. I am still nowhere near mastering it let alone ever having had any lessons. Beside the basic of basics. ‘Binding Roses‘ was the cause of this revival. Where I used a half finished sketch that I like to see through into a drawing at some point after starting over.

Sure enough the imagination is taking me for a spin and have me run n circles.

This is not a bad thing as such, though I might over estimate my self into pursuing it all. Going back some time I remember being tired after doing to much and overexerting the body and mind bringing me in a dark and troublesome state of depression and tiredness. In the end it is about controlling oneself and come out on top. So I will be taking it easy and stop hen I feel it being to much.

Now in order to keep on writing my fan-fiction and after the Ben-to there is already a story lined up. There will be a new site made to accommodate both stories. and maybe even more if I get of my arse and maybe find some people to write there as well. The new look will become a fact. Having more writers join in is an idea. Soon as I have changed its name and address I will be sure to let everyone know. Same will be when I decide to ask if any one wishes to join the fan-fiction-writers page.

Last might well be the idea that I had the last half year. Which I could get myself to create it in a form I would and would be enjoyed by the reader as well as the partaker. The idea was an interview except with a twist.

An idea to blog hop and take with me at least a question from the previous partaker in this form and have them also select the next to be interviewed. Kind of like to see where each step would take me and go around the world this way. But it takes a lot of time to come create question for the person I would be visiting. For some reason I had the plan to make a new set of questions based on their blog.

It meant a lot of reading for me and I just do not have that time nor do I want to take time from my time outdoors. Thus the idea is cancelled. I was looking forward to see what questions the interviewed would have for the following interview.

Do I have anything else to say or mention?

Not that I can think of at this moment.

Well that was it for this month’s Frolic Friday. Wish you a wonderful weekend and see you next time. For now let me raise a glass and say….

A day late but not that it would matter so much. It is a fun project that sadly is reaching its end. Not sure how much more of these shorts will arrive before the final battle truly has ended. 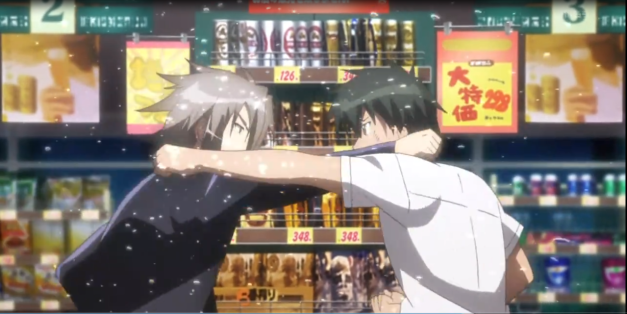 Kyou stood up and stared at Satou from across the table. Retracting her fist and pointing it with a finger straight at him. “We will fight beside you this time, But next time we’ll hunt you down like the two dogs you are, bitches.” Her lips curled up in a faint smile going around the table and ending looking down on her sister. “Hey Kyou, I did that right, didn’t I?”

“Don’t mingle me in the same class as that Pervert!” Nikaidou still could not agree with being  on equal grounds or compared with Satou.

Shaga smiled and looked at the angry face he was showing. “We should find you a nice pet name than if you want to stay a little doggy.” Petting his head that quickly retracted and growled.

“There is no other way than to try, Orthrus.” Satou’s thumb was held up as he smiled like a crook with a scheme.

It was at that moment the door swept open and a monk was passing through. Leaning on the door knob e lifts his head from his bend body and looks inside the room. “Yo, we heard a howl and came running.” Behind him a brunette popped up with her hair covering half her face and waving her hand. “Last time Barkling was running this hard and so excited something big was about to happen.”

“No way we want to miss that.” Monk finished their analysis and walked inside.

Their eyes were diverted to the wall filled with red/yellow stickers from every half priced bento that had been eaten in that club room. Only a small space was showing the colour of hat the wall used to be. Monk ran his hand along the wall feeling the edges of every sticker like tiny bumps. Brunette just stood quietly with her arms crossed and a quarter turn away, waiting for someone else to say something.

“We would be happy to have you.” Satou said with a stretched hand towards the Monk. “It’s going to be tough though.  Lots harder than handling ‘Hercules Club’.

Monk slouched his back a little and rubbed his thumb across his nose before placing it inside his pockets. “It is bound to be glorious with Pervert involved. We won’t lose.”

“Exactly” Was all Brunette said.

“Well all that is left is to ask the other wolves from the playground” Senpai smiled pushing her chair away and taking a stand beside Satou.

Everyone is high spirits of the upcoming event, except one.

Her eyes were fixed on her screen as fingers flew in rapid speed across her keyboard. Oshiroi was way past the spirits and in heaven mumbling her story as letters flashed onto the screen and reflected perfectly in her glasses. The corner of her lips curled up with from every corner little drops of saliva creeping forth.

“Saitou-san… Ghehe had his hands clasped tightly around those of the Monk. On his knees he took in every word of his prayer. Bearing his cross… ghehe… in search for salvation he waited for its blessing to cover his sinful mind.”

Everyone’s eyes glared with a blank stare towards the frantic and hyperventilating Oshiroi. Nobody dared to ask what was going through her mind.