Just something that was on my mind.

This is a two way thought as some will understand better than others. Speak up, stand up, reach out and stop it so we won’t have to apologize for not doing anything. Second is that they do not make right what is wrong.

It is something that I seen go horrible wrong, and looking at cases that seem to appear more and more in the media. The month is October and is also the awareness month for domestic violence. As the title suggested this moan is among other things about the abuse behind closed doors. Now I am by no means a mister know it all, but the dangers are real and we all should speak up if we even have the slightest idea of domestic abuse going on around you in your neighbourhood or closer to home in your family.

The moment the woman or even man with or without children is leaving becomes the time they need us the most. It is the most dangerous time as control is taken away from the abuser. What is going on in their mind becomes unpredictable and volatile but the abused need your help. Together we stand strong.

Easy to speak these words and just watch from the side-lines, but having been in the situation of a fight to protect I can say it is worth it. Having seen relatives beaten up and making excuses is saddening and sure enough had me go through ten counts of the anger management.

So to all who reads. Be aware, keep an eye out to the one walking by you in your street. Look after the kids and stand up for those who truly ned it.

Not said that everyone wants to be helped, but we need to send a signal out there we want to help. Yup I got slapped in the face when the lady I protected went straight back to him, but I always kept an eye out. Till he gone wrong again and she finally decided to leave for good.

There is something else though that I want to address in this moan and that is the escalation in abuse and aggression. It is not something that adults do behind closed doors, it is used more and more out in the open.

To start recalling all kinds of aggression sure has me need another Monday but in short the most common is the road rage. Aggression within a place we all make use off and we all had a moment of losing control. Whether it is just showing us the finger or yell curse words with the windows closed, we all had our moments of rage.

But it doesn’t stop with the drivers of cars, these days a stroll can have you get kicked, slapped by another traffic participant simple for a small bump. Though I would have to include the fact we do look more down on our screen then pay attention to the direction we are going. Still most often it is the one with the phone losing the most control as if he was not in the wrong and you could have gone around him.

Cyclist are no different and as one who likes to ride fast I to run into people who think I could do with less speed or make sure I at least break a little when people are walking at the same place. This is the athlete that evokes a lot of rage and aggression. But the usual suspect on a bike, the teenager or whoever that thinks they can type and ride bike at the same time, are just as bad. Anybody playing Pokemon Go! I been hit by people who though that the game was more important than the safety of themselves and others.

Abiding traffic rules is for pussies, or so it seems. It does have my anger well up inside me and ready to use aggression. Guilty as charged. Good thing might be I am not abusing it.

This is but a simple example and one that is also most common.

Escalation however are occurring. And with that I am referring to the robberies. A simple bus driver abused with a small axe or kitchen knife. The aggression triggered because there was only a buck or 10 to be stolen. Small diners having people stabbed just so that the robbers have some time to run off. The till was already emptied and still he had to stab the clerk with a broken wine bottle.

Not to mention of the robberies where shots are being fired. It makes one wonder where all this aggression is coming from, why we feel the need to abuse to gain something in return?

What is there to gain when we use aggression?
Is it not only asking for more aggression in return?

Today the story is about a group of four girls ages of 13 and above who tortured a fellow girl out of jealousy. And instead of feeling sorry about what they done, they felt sorry for not paying enough attention and letting her escape since she would have had to die. All this happened in Brazil, you can look it up if you want. One of the girls was even a 10 year old friend of hers.

Can you tie a friend up and hack into her with a machete?

Our fuses are getting shorter by the minute. Using aggression and abuse/assault anyone who stand in our way.

Closer to home I find these things happening as well at a very young age. My nephew being barely 10 for a day. Shouting and screaming just to be right whenever you try to teach something.

With eyes shut he does not see or does not yet understand the way things are set up these days. Having lots of things being normal to him or what he takes for granted while everything is run behind the scene or away from his understanding. Best example I could give here is the fact that we all need to log in to our games on our phone. Most the time we agreed to have it automated.

I might be old fashioned in ways of my thinking but abuse is occurring more than we know these days and only because we have trouble keeping back our aggression. With shorter fuses we walk around almost waiting for someone to light it up and have you explode.

Usually we can handle ourselves but it is the smallest of matters that sets us off and we can only feel sorry.

I hope that with this writing I can help at least one person out there keeping things in check or reach out a hand to help someone in need.

October 20, 2016 is Purple day. Wear purple and spread the word that we are out there to help those who want a chance for a better abuse free life.

It is not the first time I address something that happens everywhere in the world. It can be read in many ways I guess. The words from the prompt given by MindLoveMisery triggered something inside me and made it possible for me to write this. To many times I seen the hearts being shattered in ways that are unforgivable. I can only hope to wake people up and have them stand up against these acts. As for the title it was all I could come up with, if you have a better one let me know. 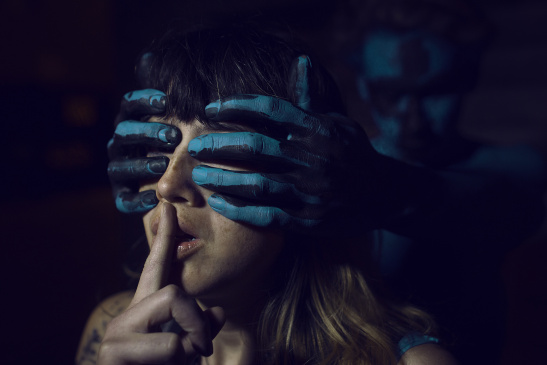 The dreams are broken
with a single smash
in anger
aggravation.
A violation of rights.
Violence to occupy
the flesh.
Pushed in a corner
without room
to escape
imprisoned
heartrending
moments die
with the tears
falling apart
on the sediments
left from a shattered
heart.
Shame, pain and blood.
The invisible scars
inked
perfidy of souls
defaced.
Nightmares becoming
an unyielding rakefire
like a static silence
lingering, waiting
to burn away
familiar life
with scourging fear.

Something I remembered from a while back and wrote down.
I experimented again with flow. And I think it came out pretty good. Strengthening either an end that is also a beginning. Hope one enjoys the read and finds what I was after with this piece. 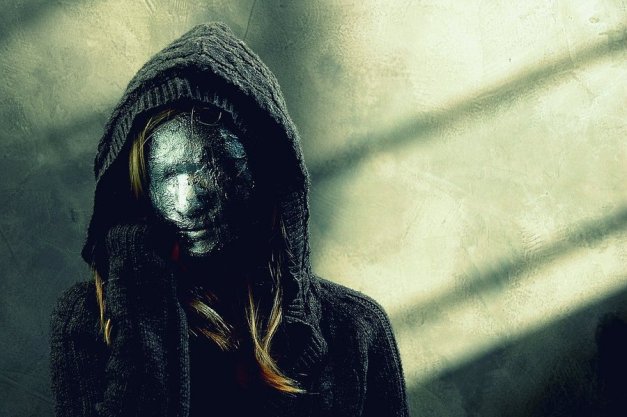 Art: Behind the mask by Laura Zelenga

All wounds
heal over time
plethora of fear

Chinks only featured
to a few
machines.

Healing all wounds
except souls
behind ripped veils.

Not a second
wasted
on surrender
hands held up
protecting
determined

we breath
to continue
at school, war
every day chores
taught not to give up
or abandon

Raise your flag
pure as white
to help those
gain back a future
stop the abuse
of our women.

Not a second
wasted
on surrender
hands held up
protecting
determined.

This year, Radio3 Serious request raises awareness for those women in areas of conflict and war. For those girls and women who are abused and sexually assaulted when captured, friend or foe alike. Hoping people will give a little to help those in need and secure a protected environment.

It is one of those stories we hear so little of and easily forget. Abuse is never right and that should be the end of it. This action is done by Dutch radio DJ’s who are locked up in a glass house for a week. Not saying we need donations but at least give it a thought and stand up for those abused. Because this maybe in war entangled countries, it could also happen at your neighbours.

Christmas is about standing together and being as one. Smiles and being safe as a family.
Make these women smile as well and feel safe as well.