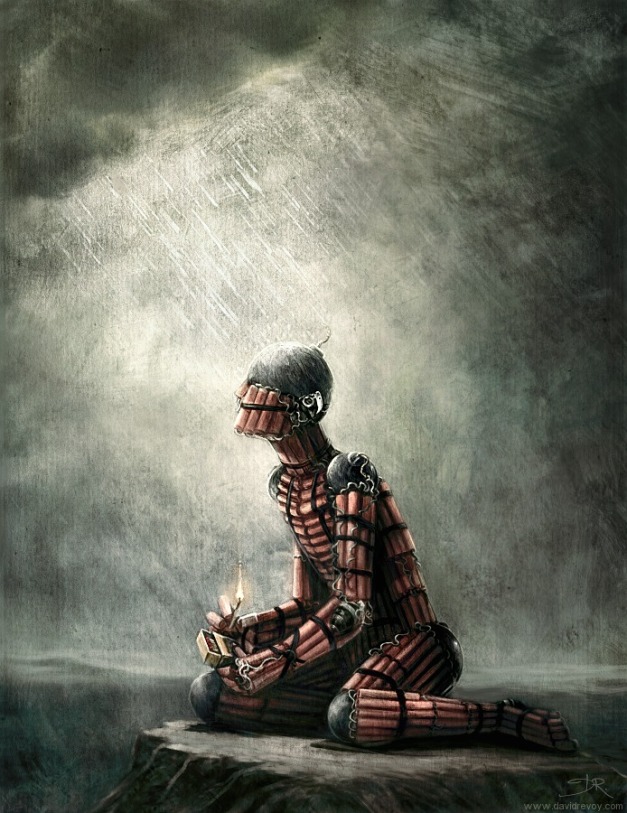 Ordalic Behavior of mister self destruct by David Revoy

It is beyond me really how we can hate and even hate so much we would kill for it. Or have such a believe that killing becomes your life and feed of the hatred for you to justify even more killing.

Let us face it is a strange way of living ones life, yet many are driven to do so. What ever reason can e used to justify that kind of violence. To  kill is to be hated, I mean does not everyone hate or certainly dislike the beheading by ISIS. It makes us want to eradicate them so it will not happen again. But at the same time they use our hatred for unnecessary killing to feed their justification and cause.

Can we even comprehend that kind of behaviour. It is us humans who are the only one who I think are capable of being hated and use that as an excuse to kill even more and turn people into radical believers or even extremist that would go all the way as to kill themselves for a belief or religion.

Sure we have not been the nicest of people as Catholics, Anglo-Saxons, Christians and God/Allah knows what else have used religions as an excuse many of time to claim to be better than the rest. And history has many stories, whether they are true or not, we to are not always liked for what we have done.

Despite all this hatred and the love each book preaches, go figure that one out, we turn out to be a destructive species. And no matter how hard we try we do not seem to eradicate this world from hate. We cannot destruct hate.

Hate is a destructive emotion, if you would ask me and I am not a person of any  knowledge on the matter let alone have a degree or master in whatever category this falls into. Hatred leads to more hate.

To hate and despise the opposite theory can come forth from not understanding or not wanting to listen and thinking your way is the only way. If y any change one way is the right way we will never find it by killing or just bad mouthing another opinion or belief. I am not on to talk though. As much as I do have loads of Muslims friends, we all hate ISIS for their way of showing their believes.

It is so simple on times and yet so hard to comprehend. Clearly one thing we all agree on except for those showing it off as a means of power, that a beheading or killing/murder is not the way to go. We all want peace and stop the killing but not one of us would know how.

Many a theory suggest we are not capable of peace. That our mind is triggered like those of animals. Who know maybe al we crave is power and be the best. It is in our nature. But as one of the smartest of species on this planet one would think we can look beyond that and just not pick up arms. Being one of the few species that can feel or be Greedy is another one of those emotions or feeling or maybe chemical reactions that drover us to where we are now.

Why do we point fingers to those who think differently as being wrong and to quote some old sayings. Why are they heretics. It is not said they are wrong nor are they right. But the same goes for any belief or religion. Science or religion are tow separate believes yet we are co-excising. Eating the fruits of our labour and discoveries. Why can’t religion do the same with another religion is my biggest question.

To love your neighbour. I mean I believe it is written in every religious book. And still we pick up a gun or knife on those same neighbours. Not one books condemns or hates their neighbour.

Would it be okay to go to war and die in battle for your religion or beliefs. The Vikings did though they did not hate as far as we know. They just fought to the death to see Walhalla. The killing is the same the reason even creepier as we know so little about them.

Die with honour for a belief and end up with forty virgins. (I believe it was 40) But still what God would approve the death of others. Unless it was Ares or something the God of War from Greece was it. But as far as my mythology goes he was embodiment for killing people.

It gets one to think what God these days claims war or murder as a vessel to tell and spread believes or religions. We hate people who think it is okay and yet these people use our hate against us by killing more. Simply put if you hate us we kill you. And they are to stupid to understand that it was our first killing that brought upon that hatred. A killing for no reason at all other that to cause hate and spread the destructive hate even further.

It is a sad day once again. A sad world if we keep spilling blood to be hated. It is a self destructive hatred and we are all being dragged into it.